The term deregulation describes modification of regulatory rules to provide for competition in certain sectors in the industry. In some regions, the terms liberalization and/or market restructuring are used instead of deregulation. Implementing deregulation in the natural gas industry involves breaking up long-term contractual arrangements that historically resulted in gas utilities asserting control over all sectors. In some cases, gas deregulation may result in utilities divesting of assets in certain sectors such as pipelines, and in removing the utilities’ monopoly on selling supply to end-use consumers. The sectors in the gas industry where competition can be introduced include wholesale supply, wholesale trading, and retail sales. Transmission, operations, and distribution services are considered monopoly functions, at least for the foreseeable future. However, if competition is to be introduced in the other sectors, the monopoly sectors must be modified to allow for competition in the other sectors.

The diagram below shows the gas supply market structure in a regulated market that has not undergone deregulation. Under this structure, contractual arrangements tend to be long-term (often as long as 10 to 30 years). 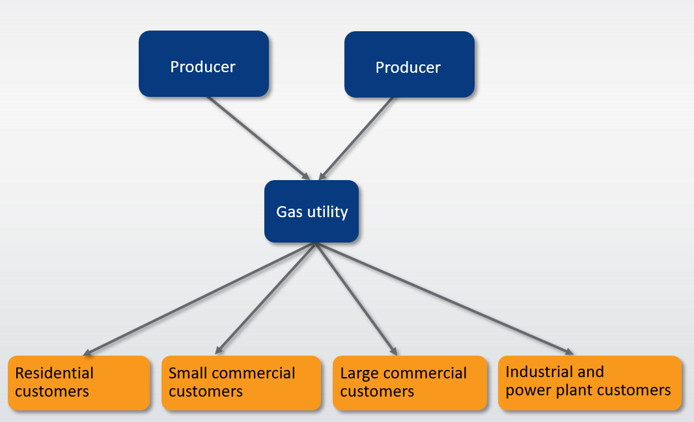 The next diagram shows the gas supply marketplace after deregulation. Dotted lines indicate that smaller customers may have the choice of buying from a marketer but may also have the choice of remaining as a supply customer of the utility. In both cases, the utility continues as the regulated transporter of gas supply. Under this structure, most contractual arrangements are shorter in term (often one year or less). 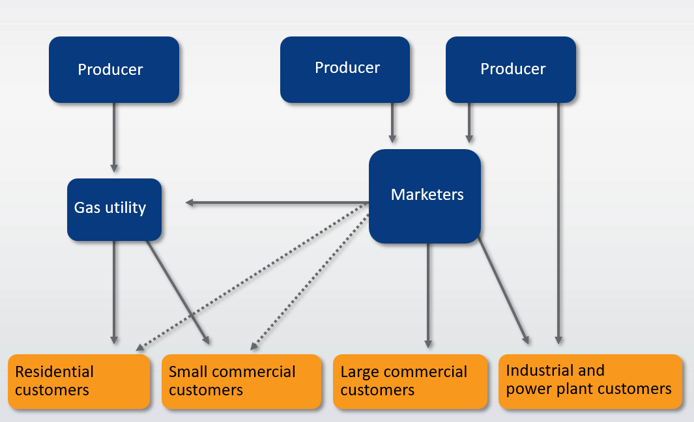 In the U.S., both federal and state regulation of the gas industry have seen significant changes in recent years. The diagram below shows the milestones in the history of gas deregulation.

The restructuring of the gas industry began in 1978 when Congress passed the Natural Gas Policy Act (NGPA), which initiated deregulation of the wellhead price of natural gas. Previously, wellhead prices had been controlled by a complex set of regulations that resulted in considerable restraint of supply. Deregulation of wellhead prices resulted in a temporary price increase, followed by increased development of reserves and ultimately more supply at lower prices. Today, most observers believe that over the long run market forces efficiently operate to keep supply and demand in check, and that consumers have benefitted from market-based gas prices and ample supplies to meet market demand.

With prices deregulated, a spot market for natural gas arose. However, the ability of end-use markets to access spot gas was severely restricted because most interstate pipeline capacity was controlled by the pipelines themselves, which moved only the gas they owned. This "merchant gas" was purchased in supply basins under long-term contracts and resold to LDCs, also under long-term contracts. In the mid-1980s, the FERC acted to restructure the way interstate pipelines offered services. Through a series of orders, culminating in Order 636, the FERC restructured long-term commitments by pipelines and required all pipelines to become mere transporters of gas. Now, most pipelines offer limited supply services and act as "open access" or "common carriers" of other parties’ gas supply. The major components of Order 636 include:

Capacity release — Pipelines are required to allow firm transportation customers to re-sell or broker their unused capacity to other users, thus creating a secondary transportation market.

Straight fixed variable rate design — Pipeline rate structures were changed so that all fixed costs associated with transportation (including return on equity and associated taxes) are recovered through fixed reservation charges. This encourages holders of firm capacity to release their unused capacity to other parties since they pay full charges whether they use it or not.

Since the implementation of Order 636, the interstate transportation market has become increasingly competitive with capacity traded on a daily basis. Adept marketers have learned to use the secondary market to significantly reduce their costs of transportation.

The initial impetus for state deregulation was the potential for bypass. Under federal regulation, large commercial and industrial customers are allowed to connect directly to an interstate pipeline, thereby bypassing LDC distribution service. Since bypass deprives the LDC of revenues that could support the LDC system for all customers, many states chose to deregulate the supply function by allowing some or all customers to choose to buy their supply from a third-party marketer. This option is commonly called direct access, gas supply choice, or customer choice. And for customers likely to pursue bypass such as large commercial and industrial customers, LDC distribution rates are often reduced significantly. The result is a mix of state regulations allowing some or all customers to purchase their supply from a marketer while continuing to use the LDC to transport the gas.

Many state regulatory commissions have also initiated reforms to modify regulatory oversight with performance risk for utilities. A good example is the core procurement function. Without performance-based ratemaking (PBR), utilities purchase gas for their core customers and are subject to reasonableness reviews at which their gas buying decisions are reviewed after the fact (a sort of regulatory Monday morning quarterbacking). If certain purchases are deemed "unreasonable," the utility stands to lose considerable money because the amount that is determined to be unreasonable has to be credited back to the ratepayers. This money is not recoverable from future rates, but rather paid by the shareholders. To make matters worse, there is no upside for the utility in a reasonableness proceeding.

Under PBR, the commission sets a benchmark it deems just and reasonable for the procurement of these supplies. The utility then sets out to beat the benchmark price. If it comes in just at the benchmark, it neither loses nor gains additional money. If it beats the benchmark, savings are usually shared between ratepayers and shareholders. And if it falls short, the additional costs are also shared between ratepayers and shareholders. PBR is often preferred by utilities because it sets standards and concrete targets before the gas purchases are made, not after. From the regulatory commission’s perspective, this also avoids a costly reasonableness proceeding where the commission must study each expenditure to determine whether it was reasonable and should be included in rates. Such reforms increase the possible return that utilities can obtain, but also increase the risk that below standard returns will occur. More importantly, PBR gives the utility clear and consistent goals to meet in its performance – something certainly lacking in a reasonableness review. And it avoids what could be considerable costs to defend the utility’s purchasing decisions. It is likely that PBR and other types of incentive regulation will continue to evolve as the energy industry moves forward.