A distributed energy resource (DER) is a supply or storage resource that is located at an end-use consumer site or that is connected directly to the distribution grid. There are three categories of DERs. 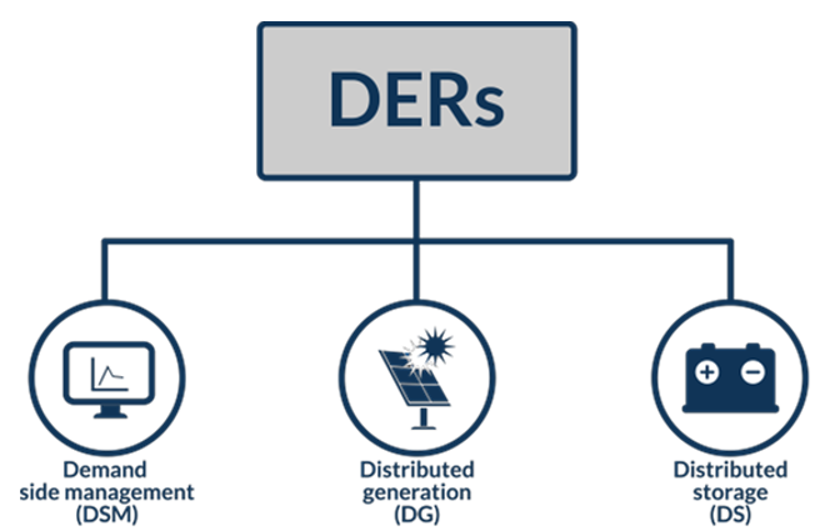 Demand side management (DSM) consists of electric loads whose usage can be altered either permanently or temporarily. This includes energy efficiency and demand response (DR).

Distributed storage (DS) consists of resources that have the capability to both absorb electricity and supply energy back at a later time. DS technologies include thermal energy storage, battery storage, and flywheels.

DERs can be aggregated to provide blocks of useful resources. Forms of aggregation include blocks of DSM resources, virtual power plants (VPPs), and microgrids.

End-use consumers often invest in DERs for the purposes of reliability and reduction of energy bills. And in certain cases, DERs can participate in wholesale markets. These include DR, cogeneration, wind and solar connected directly to the distribution system, and DS. In the future, evolution of additional market opportunities for DERs is expected. This could include participation of aggregated DERs in wholesale markets, as well as development of distribution level markets. In such markets, DERs have the potential to provide capacity, energy, and ancillary services. DERs may also provide resources for non-wires alternatives (NWAs) utilized by distribution utilities as an alternative to capital investment in the grid.

Many in the electricity industry expect that DERs will grow rapidly. A paper released by the Federal Energy Regulatory Commission (FERC) forecasts that DERs could make up over 60 GW of capacity in the U.S. by 2024:

The Energy KnowledgeBase by Enerdynamics is the always up-to-date, indispensable energy industry resource of concepts and terminologies essential to all energy industry professionals.

If you've forgotten your password, you can reset it.

Suggest an edit to this topic