There are two types of electrical current: direct current, or DC, and alternating current, or AC. In an alternating current system, the electrons flow through a material in one direction, and then reverse their path and flow back in the other direction. This happens repeatedly at a rapid rate. In fact, in U.S. systems the current changes direction 120 times per second, while in other countries the rate of change is 100 times per second. 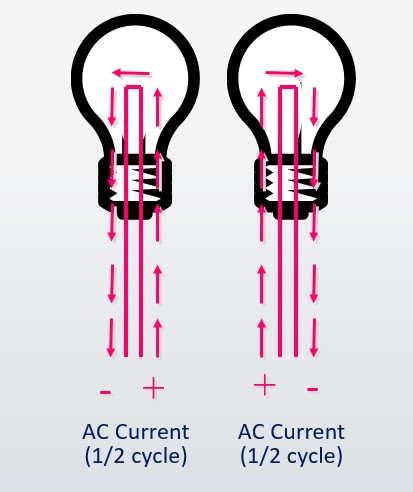 Here’s a simple example of how this works.

While DC electricity can be produced by multiple devices, AC electricity is produced only by AC generators or by converting DC electricity to AC using an inverter. With the exception of a limited number of high-voltage direct current (HVDC) transmission lines, almost all of the electric grid today carries AC power. This is because system designers decided to use AC power early in the development of the electrical grid since it is relatively easy to convert voltages from high to low using devices called transformers. This allows higher voltages to be used to transport power long distances, thus reducing losses and allowing for smaller and cheaper conductor sizes. Power is then reduced to the lower voltages used by appliances and other equipment as the system reaches customer facilities.