The general concept behind depreciation is that most assets lose value over time. The loss of value comes through effects of wear and tear, actions of the elements, and innovation resulting in technological obsolescence. Two types of depreciation are important in utility finance: capital depreciation (for ratemaking) and tax depreciation (for tax obligations).

Depreciation is a component of a utility revenue requirement by which the utility recovers from ratepayers funds provided by investors for purchase or construction of capital assets. Depreciation is spread over the life of the asset as defined by the utility’s regulator. Utilities typically use straight-line depreciation, which means an equal amount of the value of the asset is returned to investors each year that the asset is depreciated. It is recorded as an expense on the company’s income statement and is included in the calculation of the utility’s revenue requirement for the purposes of setting rates. It is important to note that once an asset has been fully depreciated (i.e., the investors have received the full value of the original capital cost of the asset), it may still be operational.

Tax law often allows utilities to reduce income taxes paid in a given year by an amount equal to calculated depreciation associated with capital assets. Again, depreciation is spread over a period of time, but in this case, the time period is determined by tax law and not regulation.

Several methods exist for calculating depreciation. For ratemaking purposes the most frequently used is the straight-line-remaining-life method. This method is described by the following formula:

B = book or original capital cost

A = accumulated depreciation from prior years

For example, suppose a utility invests $100 million in new meters with a regulatory life of 10 years, but tax law allows the assets to be depreciated over five years. In this example we’ll assume the meters have zero removal costs and zero salvage value. The resulting depreciation for each purpose is shown below: 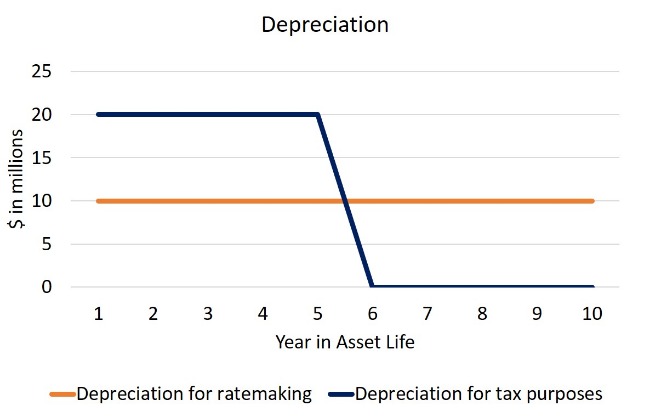 In the example shown above, the utility gets a tax benefit by accelerating depreciation of the meters over five years rather than 10.