Investor-owned utilities, or IOUs, are for-profit corporations owned by either public or private shareholders. Most are publicly owned with stocks traded publicly, while others are owned by private equity. IOUs may provide gas or electric service, and many provide both. In some countries, and provinces in Canada, the government holds large blocks of stocks in IOUs and with the remaining smaller amounts of stock publicly traded.

Because these entities are for-profit, they must be regulated to ensure that the interests of consumers are being preserved. Each IOU is assigned a specific franchise service territory by the regulator and is responsible for serving all consumers within that area. No other entity can provide gas or electric distribution services in the IOU’s service territory. The regulator determines the rates the IOU can charge and sets the conditions under which the utility can earn a profit.

In the U.S., electric IOUs traditionally owned all their own generation, transmission, and distribution and managed their own system operations. Due to a federal regulation called PUHCA that was repealed in 2005, IOUs were mostly prohibited from crossing state lines, and thus a fragmented market of numerous IOUs evolved. IOUs typically interconnect, however, and trade with each other to take advantage of cost and reliability benefits. While in some cases multiple IOUs are owned by the same corporate holding company and some functions are centralized, each IOU is still run as a separate company for regulatory purposes. Following deregulation in many regions of the U.S. in the 1990s, many IOUs unbundled so that the companies were no longer vertically integrated. In some cases IOUs sold off generation assets and focused solely on transmission and distribution. 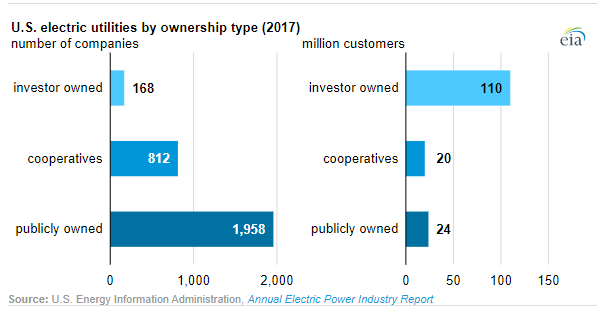 As of 2020, Investopedia listed the top ten IOUs in the world (measured by market cap of parent companies) as: