The use of nuclear energy for power generation became a commercial technology in the 1960s and grew rapidly in some countries around the world during the 1970s and 1980s.   Key initial countries investing in nuclear energy included Canada, France, the Soviet Union, the United Kingdom, and the United States. More recently, nuclear power has grown in Asian countries including China, Japan, India, and South Korea. 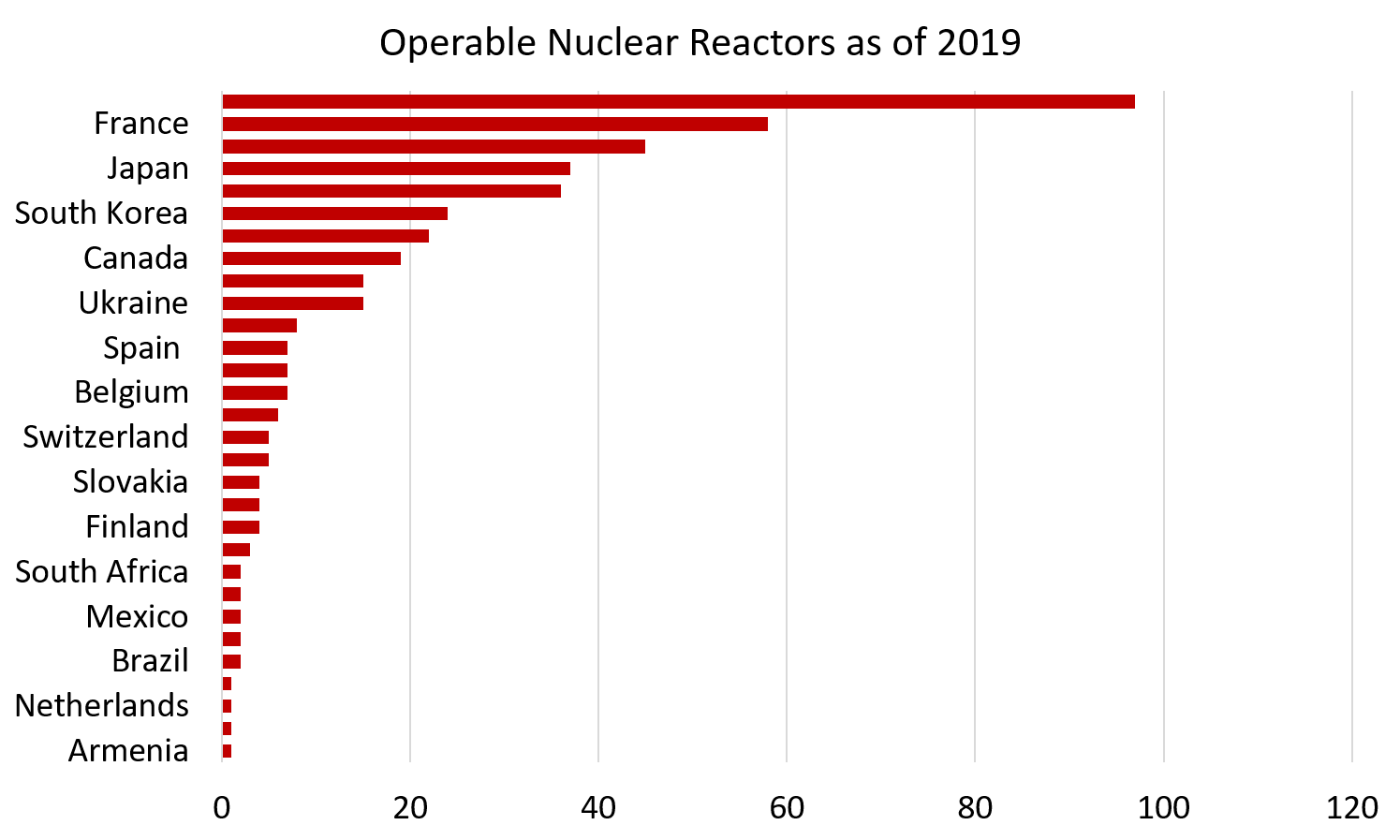 Current nuclear power plants use the concept of heating water or another liquid in a boiler to drive a steam turbine. The heat is created through a process called nuclear fission whereby the nucleus of each atom of nuclear fuel such as uranium or plutonium is broken apart in a chain reaction resulting in the release of large amounts of heat. The fuel consists of pellets that are placed into metal tubes or rods.

Nuclear units are generally large and range in size from 600 to over 1,500 MW. Often multiple units are included in one power plant. Key components in a nuclear reactor include the fuel core, the control system, the primary cooling system, and additional cooling systems.  Reactors are built within a containment vessel so that any release of radiation does not go into the atmosphere.

Capital costs associated with new nuclear units are very high, variable costs including fuel are generally low, while fixed maintenance costs are high due to the extreme safety procedures required as well as the need to collect money for future decommissioning costs. Most nuclear units do not have good operational flexibility, and startup times are usually measured in days. Because of this inflexibility, nuclear units are normally used for baseload needs. In some cases a portion of the unit capacity can be used for flexible ramp, but this is not as common as with other generation technologies.

While multiple reactor designs are used worldwide, the most common reactor types are the Pressurized Water Reactor (PWR), Pressurized Heavy Water Reactor (PHWR), and the Boiling Water Reactor (BWR). Additional types of reactors under commercial operation include Gas-cooled, Light Water Graphite, and Fast Neutron Reactor. Research is now underway to develop Small Modular Reactors (SMRs) that are practical in smaller unit sizes of 300 MW or less. Here is a simplified graphic showing how a PWR works: 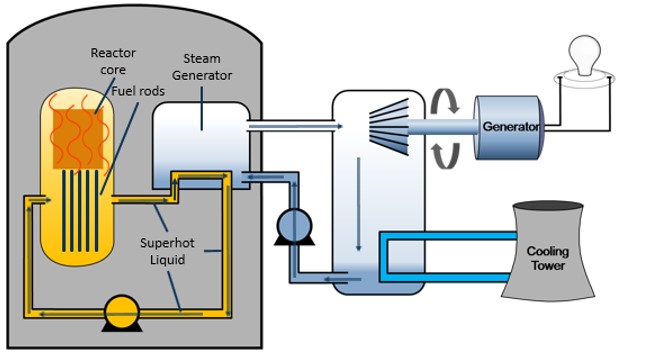 The PWR circulates highly pressurized water through the reactor core. Because the water is under high pressure it does not boil even though it becomes very hot. This superhot liquid is then piped to the steam generator where through a heat exchanger it heats unpressurized water that becomes steam. The steam is then moved through a steam turbine in similar fashion to a gas or coal steam turbine. A PHWR uses a similar concept with a different liquid called heavy water.  In a BWR the liquid used to create steam is the same liquid that is circulated into the reactor core.

New development of nuclear generation in many parts of the world including the U.S. and Europe has been hampered by key issues — the lack of a waste disposal site for spent fuel, public concerns over the risks of a major nuclear accident or terrorist attack, and high costs. Public concerns about nuclear power risks were increased by the crisis in Fukushima, Japan, where the March 11, 2011, earthquake and tsunami caused severe damage to nuclear reactors owned by Tokyo Electric Power Company. The effects of the natural disaster damaged the power plants, disabling primary and backup power systems and resulting in core meltdowns, radiation releases, and the need to evacuate over 100,000 people from their homes. Although no deaths occurred directly related to the radiation release, long-term health effects are unknown. The units affected were permanently damaged and have been shut down.

Some countries such as Germany responded by announcing plans to eliminate all nuclear power over time. Others such as the U.S. adjusted safety contingencies based on what was learned from Fukushima and continued moving forward with existing plans.

Despite the perceived safety issues, nuclear generation is favorable from the standpoint of emissions — no greenhouse gases or pollutants such as NOx, SO2, or mercury are emitted from nuclear generation. The first new nuclear unit in the U.S. since 1996 was brought into commercial operation in 2016, and as of 2020 two more new units are under construction and expected to be online later in the decade. A partially constructed two-unit project in South Carolina was cancelled in 2017 due to high costs and construction issues, and no further new units (beyond the two under construction) are currently forecast in the U.S. Meanwhile, several older nuclear units are being retired in many countries around the world. But elsewhere, in countries such as China, India, Korea, Russia, and the United Arab Emirates construction of new nuclear units continues. 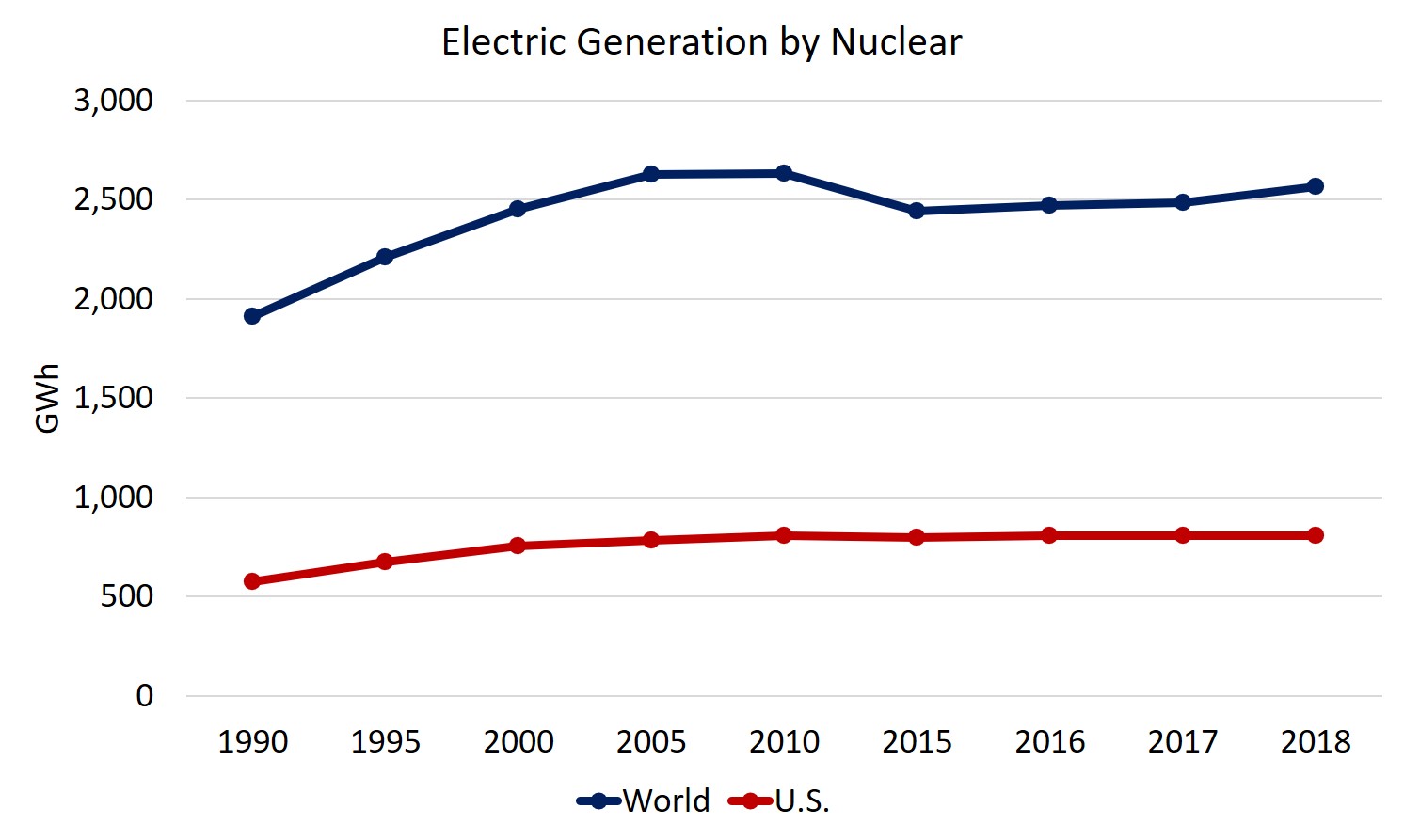