Although nuclear steam turbine power plants use the same concept of heating water in a boiler to drive a steam turbine, the means by which heat is created is very different from steam or coal power plants. In a nuclear power plant, heat is created through a process called nuclear fission whereby the nucleus of each atom of nuclear fuel such as uranium or plutonium is broken apart in a chain reaction resulting in the release of large amounts of heat. The fuel consists of pellets that are placed into metal tubes or rods. 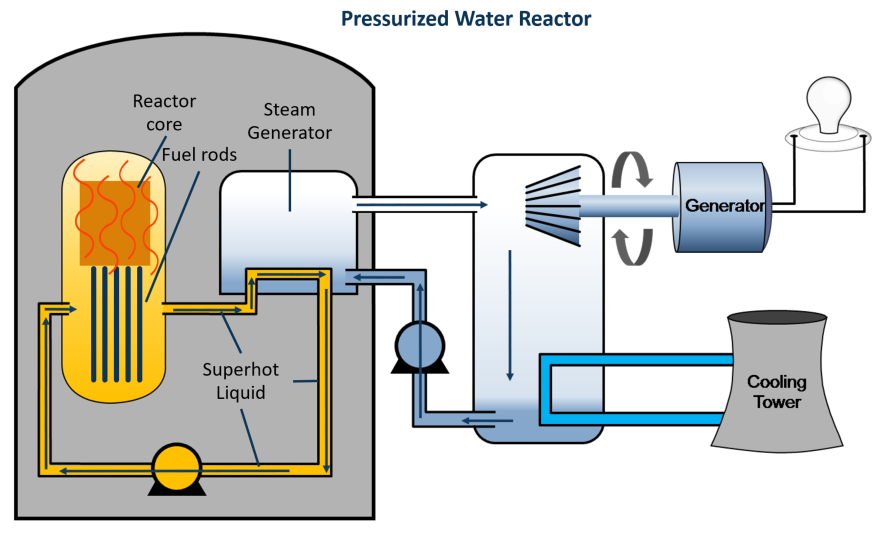 There are two designs that are used in the U.S. The most common units are pressurized water reactors or PWR. These circulate highly pressurized water through the reactor core. Because the water is under high pressure it does not boil even though it becomes very hot. This super-hot liquid is then piped to the steam generator where through a heat exchanger it heats unpressurized water that becomes steam. The steam is then moved through a steam turbine in a similar fashion to a gas or coal steam turbine. 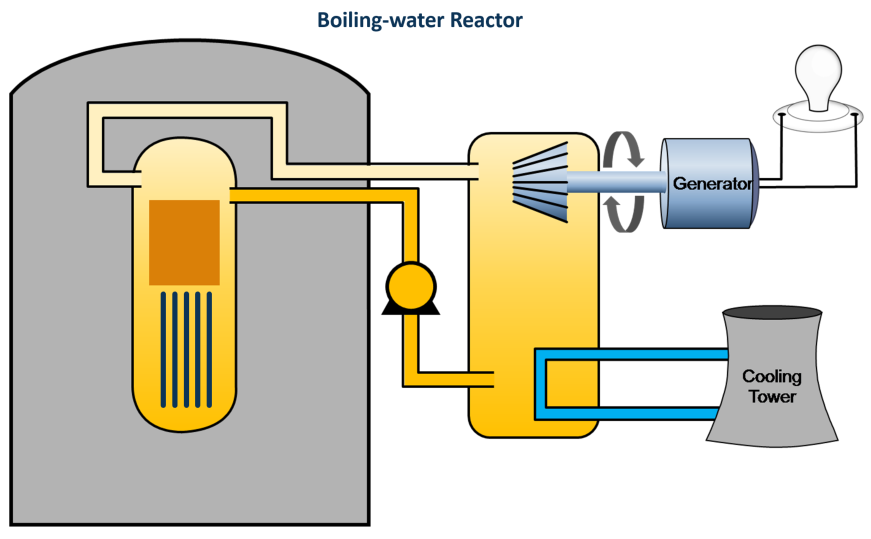 An alternate design is the boiling-water reactor or BWR. A BWR circulates the same water that goes through the reactor all the way through the steam turbine eliminating the need for the heat exchanger and separate water loop.

Nuclear power plants are more complex than either gas or coal units for many reasons. While fuel storage and handling at a nuclear power plant do not require significant space since fuel amounts are small, the fuel must be handled carefully since it is a radioactive material. The reactor itself must be carefully controlled and monitored since an uncontrolled reaction could result in temperatures escalating out of control. And since the release of radioactive materials into the environment could be harmful and even deadly, the reactor core and steam generators are covered by a containment vessel made of heavy steel. This vessel is designed to contain any radioactive materials that might be released due to an accident.

Nuclear units do not require emissions control technologies because no materials are emitted during the generation process. However, spent fuel that no longer has enough energy to sustain power production must be handled carefully since it remains radioactive for up to thousands of years. In the U.S. spent fuel is currently stored onsite at the power plant location in secure storage ponds or above ground cement casks. Ultimately, it is expected that the fuel will be moved to a permanent storage location, but no such facility has yet been approved in the U.S.