There are multiple generation technologies that can be used as distributed generation resources. Technologies range from small backup diesel generators and rooftop solar photovoltaic (PV) systems to large community solar projects and wind farms that are connected at distribution voltages.

There are two key categories of DG that are based on the way the technologies interact with the electrical system. First are the various technologies similar to utility-scale turbine or engine-based synchronous generators. These include combined heat and power and reciprocating engines. The second category includes solar photovoltaic, wind, and fuel cells that require an inverter using power electronics to interface with the grid. 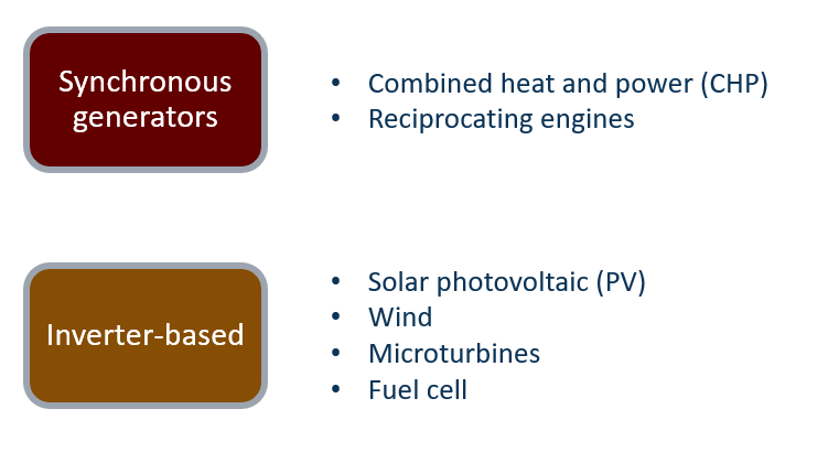 Many regions in the U.S. have historically had, and continue to have, significant CHP capacity. This is also true of backup generators that are reciprocating engines. In the U.S., the late 2010s saw rapid growth in distributed generation in some regions due to growth in rooftop solar. This growth has continued in the 2020s. Also in the early 2020s, distributed battery storage began to increase significantly.

End-use consumers often invest in DG for the purposes of reliability and reduction of energy bills. And in limited cases, CHP projects can participate in wholesale markets. In the future, evolution of additional market opportunities for DG is expected. This could include participation of aggregated DG in wholesale markets as well as development of distribution level markets. In such markets, DG has the potential to provide capacity, energy, and ancillary services. DG may also provide resources for non-wires alternatives (NWAs) utilized by distribution utilities that avoid certain capital investments in the grid.