Geothermal resources are used as a source of hot water or steam for geothermal power plants. There are three sources of geothermal heat that are currently used in commercial or demonstration power plants:

Geothermal heat naturally occurs below the earth's crust in a layer of hot and molten rock called magma. Typically temperatures are higher deeper into the crust. Hot spots where higher temperatures come close to the surface occur at plate boundaries or at places where the crust is thin enough to let the heat through. This typically occurs in seismically active areas and/or areas with active volcanoes. In these areas, magma may occur within a few thousand feet of the surface. In addition, there is a vast amount of heat energy available from dry rock formations two to six miles below the earth's surface. 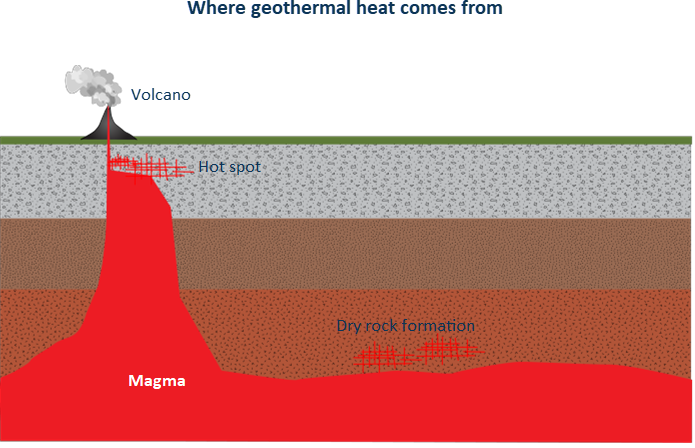 In a conventional hydrothermal reservoir, hot water and/or steam is created when water seeps downward into the earth's crust and is heated by the geothermal heat. The hot water and/or steam then flows back upward through permeable or porous rocks until it is trapped by an impermeable layer creating a geothermal reservoir or until it reaches the surface.

While most current geothermal plants utilize hot water or steam from reservoirs near the earth's surface known as conventional resources, development work, including pilot projects, is being done to see whether it is practical to access geothermal energy from the deeper hot dry rock formations.