Once exploration has provided enough evidence to indicate the existence of a natural gas reservoir, a decision must be made on whether the characteristics of the reservoir make it likely it will be profitable to drill a well. But before any drilling takes place, the exploration and production (E&P) firm must first lease or purchase mineral rights and obtain the necessary permits.

Once this process is complete, an exploratory well is drilled to see if sufficient gas does in fact exist in the reservoir. Even the technological advances cannot guarantee that natural gas will be where exploration indicated it might be. In fact over one-third of exploratory wells are dry, meaning no economic amounts of gas exist. Certainly not the most favorable odds for a well that could cost as much as $15 million onshore or more than $100 million offshore to drill and develop.

The placement of an exploratory well will depend on physical characteristics of the reservoir and the surface terrain, availability of gathering pipelines, as well as legal and regulatory issues such as permits and land rights. Drilling itself is performed by driving a rotating metal bit through the ground (known as rotary drilling). Offshore drilling uses similar technology but is somewhat more complicated because a platform must be constructed to hold the drilling rig. Once the drill enters the gas reservoir, the E&P firm can begin to estimate the ultimate productivity of the new well. Hopefully the exploratory well will indicate the producers have tapped an economic resource that can be developed to a productive state. 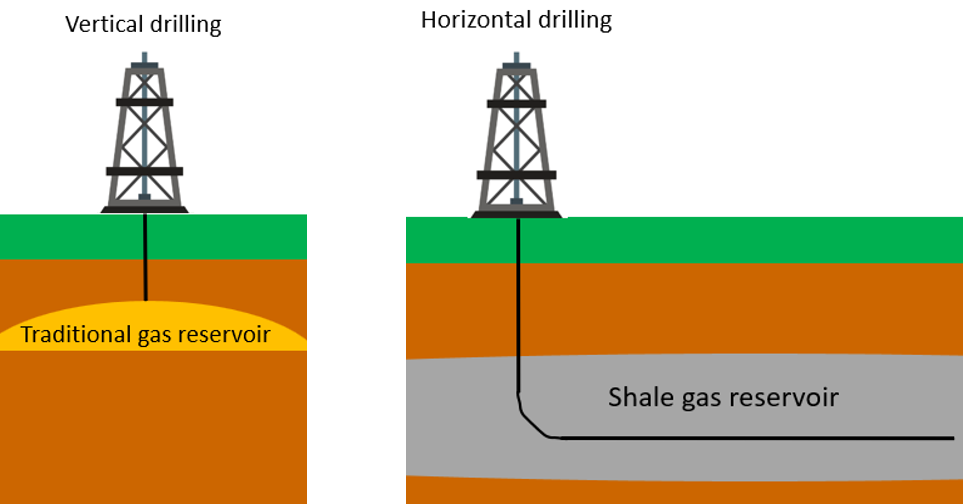 Wells may be drilled vertically or horizontally. Recent advancements in directional drilling and horizontal wells have allowed production from some formations that previously were uneconomic. Down-hole motors are used to drive the drill bit making both horizontal and multilateral wells possible. Horizontal wells pass through more of the reservoir, markedly increasing the production rate. Multilateral wells allow multiple reservoirs to be drilled through the same well bore. These techniques reduce the surface footprint such that one drilling location may now replace 10-15 wells drilled vertically. This can be especially important in environmentally sensitive areas or where access is limited.

Once it is determined that a proved resource exists, the next step is to complete the well so that the natural gas can safely flow to the surface. This process is called well completion. First, steel casing is cemented into the hole to prevent it from collapsing and to keep fluids from flowing through the well bore and into another formation. This is especially important in preventing freshwater contamination. Next, the casing is perforated next to the gas-bearing formation. Then production tubing is run inside the casing and attached to the wellhead. The wellhead consists of a series of valves at the surface of the well that regulate gas pressure and prevent leakage. If the gas reservoir has enough pressure and permeability, natural gas will flow to the surface naturally due to the pressure differential. In some cases, treatments such as hydraulic fracturing are used to increase natural gas production rates. Last, the wellhead is connected to the gathering system which carries the gas to a processing plant. In some cases pre-treatment may occur at the wellhead such as dewatering or removal of heavier liquid hydrocarbons.