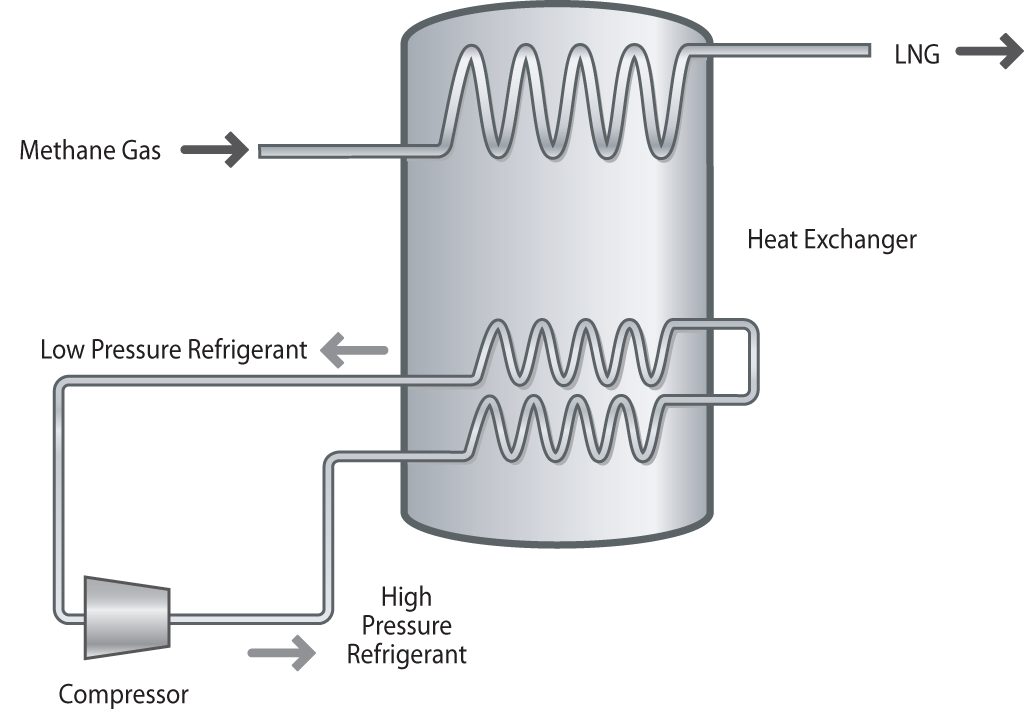 Liquefaction is the process of converting natural gas (methane) from a gas to a liquid by cooling the gas to a temperature of about -260°F (-162°C). The liquid methane is called liquefied natural gas or LNG. Liquefaction of natural gas reduces the volume of the gas by a factor of 610. This allows the gas to be stored in a smaller vessel than is required for natural gas in the gaseous state. Natural gas is liquefied for multiple reasons:

Gas is typically liquefied at one of three points in the gas delivery system:

The three basic steps of the liquefaction process are as follows:

Removal of impurities and recovery of natural gas liquids (NGLs)

The gas supply that comes from the production field is called raw feed gas. This is typically made up of methane; other hydrocarbons such as ethane, propane, butane, and/or pentane; and substances such as water, sulfur, mercury, and other impurities. The raw feed gas is delivered via pipeline to a processing plant. Here the gas is processed to remove impurities as well as valuable NGLs. The first step is pretreatment, which includes the removal of acid gas such as carbon dioxide and sulfur, as well as mercury and other substances. All of these must be removed either because their freezing points are well above the temperature of the final LNG product (and they could freeze and damage equipment during the cooling process), or because they are impurities that must be removed to meet pipeline specifications at the delivery point. Next water is removed.

After the above steps, the NGLs such as ethane, propane, butane, and pentanes (also known as heavy hydrocarbons) are removed and collected. In many cases the gas is processed upstream of the liquefaction unit using traditional gas processing technology (i.e., the same processing that is done to any gas entering an interstate pipeline system). In other cases, the NGLs recovery may be done as an integral step in the liquefaction process. The NGLs may be sold as valuable bi-products and/or may be used as refrigerants for the liquefaction process. They may also be reinjected into the LNG stream at a later point to adjust the Btu content and flammability characteristics of the LNG.

Liquefaction of the methane

Next, the methane is cooled to –260°F (-162°C) using LNG liquefaction technology. In this step, the methane mixture liquefies into the final cryogenic liquid state. Although slightly different processes are used in various facilities, the basic cooling and liquefaction principles of each process are the same. The key technology is multiple heat exchangers. Here, a cold liquid refrigerant is passed through cooling coils and the natural gas stream is allowed to flow over them, resulting in cooling of the gas stream. As the temperature drops to about –260°F (-162°C), the gas becomes liquid and can then be pumped into a storage tank.

Liquefaction facilities are generally constructed in modular units called trains. A train is a complete standalone processing unit, but often multiple trains are built side by side. Train sizes currently range from less than 1 to 8 million tonnes per annum (MTPA). The larger train sizes are becoming common in new plants as engineers attempt to take advantage of economies of scale.

Storage and pumping the LNG into tankers

After the liquefaction process, the LNG is pumped into a cryogenic storage tank. These tanks are typically double-walled with an outer wall of reinforced concrete lined with carbon steel and an inner wall of nickel steel. Between the two walls is insulation to prevent ambient air from warming the LNG. The LNG is stored in these tanks until a tanker is available to take the LNG to market. Storage tanks are sized based on the size of the tankers that will transport the LNG plus additional capacity to allow for scheduling flexibility and handling of plant outages. Many facilities include multiple tanks with the total capacity typically sized for twice the size of the expected tanker capacity so that up to two tankers worth of LNG can be stored at one time. Current tank sizes range from 36,000 m³ to 188,000 m³ with typical tanks sized in the 136,000 m³ to 148,000 m³ range.

Smaller liquefaction facilities can be placed directly on a barge or a ship. This allows smaller deposits of offshore or onshore gas resources to be accessed. Floating liquefaction projects are typically smaller in capacity than onshore liquefaction plants (approximately 0.5 MTPA to 4 MTPA). Small barge-based floating projects, typically around 0.5 MTPA, are often based at or near the shoreline and supplied by gas from onshore resources. Larger floating LNG (FLNG) ships tend to be used to access small offshore resources. These ships can be moved around and thus are not tied to one specific gas resource.