Raw natural gas is composed primarily of methane, the simplest hydrocarbon, along with heavier and more complex hydrocarbons such as ethane, propane, butane, and pentane that are called natural gas liquids or NGLs. NGLs are valuable by-products of natural gas and are sold separately. In addition, natural gas typically contains non-flammable components such as nitrogen, carbon dioxide, and water vapor and may contain hydrogen sulfide that must be removed for safety and to ensure clean emissions. What we burn in our homes and offices, however, is primarily a blend of methane and ethane.

Natural gas is one of the cleanest commercial fuels available since it produces only carbon dioxide, water vapor, and a small amount of nitrogen oxides when burned. Unlike the combustion of other fossil fuels, natural gas combustion does not produce ash residues or sulfur dioxides. And when used to generate electricity, natural gas emits less than 50% of the greenhouse gases emitted by coal on a per megawatt-hour (MWh) basis. In some areas, natural gas is often referred to as a "bridge fuel," meaning that it is the most environmentally benign fossil fuel that can help fulfill our energy needs until we further develop our renewable energy sources. This is especially true when natural gas replaces coal as a fuel for electric generation.

However, when methane is released in the atmosphere without combustion, it is a dangerous greenhouse gas that is 20 to 40 times more potent than carbon dioxide. Therefore released methane is a significant environmental concern across the entire natural gas delivery system.

While several theories exist to explain the development of natural gas, the most widely accepted holds that natural gas and crude oil are the result of the decomposition of plants and animals buried deep beneath the surface of the earth. The theory goes something like this:

Organic material typically oxidizes as it decomposes. Some organic material, however, was either buried before it decomposed or deposited in oxygen-free water, thereby preventing the oxidation process. Over millions of years, sand, mud, and other sediments – along with these decomposed plants and animals – were compacted into rock. As layer upon layer of material covered this rock, the weight of the earth above along with the earth’s heat changed the organic material into oil and gas. Over thousands of years the earth’s pressure pushed these substances upward through permeable material until they reached a layer of impermeable rock where they became trapped. Natural gas accumulates in reservoirs that are typically found between 3,000 and 25,000 feet below the earth’s surface. Gas may be found in “conventional” or “unconventional” formations as shown in the illustration below. 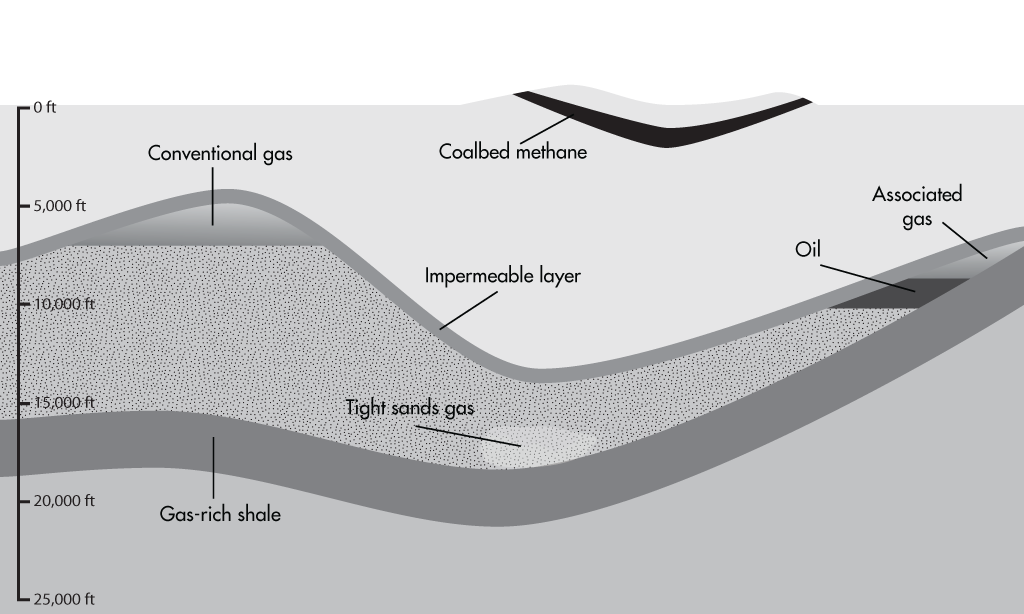 Conventional natural gas reservoirs are geologic traps in which an impermeable rock traps gas that has collected in pores in permeable rock. Over time the gas migrates up to the impermeable cap through cracks in the rock because the gas is less dense than other materials in the rock. When water is present in the formation, the lighter gas will displace the water to the bottom of the permeable layer. Conventional natural gas is typically found in sandstone beds and carbonate rock. Reservoirs may contain just natural gas, in which case the gas is called non-associated, or may contain both gas and oil, in which case the gas is called associated. Wells are drilled into these reservoirs and natural gas flows upward from the high-pressure condition in the buried reservoir to the lower-pressure condition at the wellhead (the top of the well at the surface). Natural gas also accumulates in other types of formations resulting in what is called unconventional gas. Gas in these formations includes:

Both conventional and unconventional sources (except for methane hydrates) have become important resources in recent years.