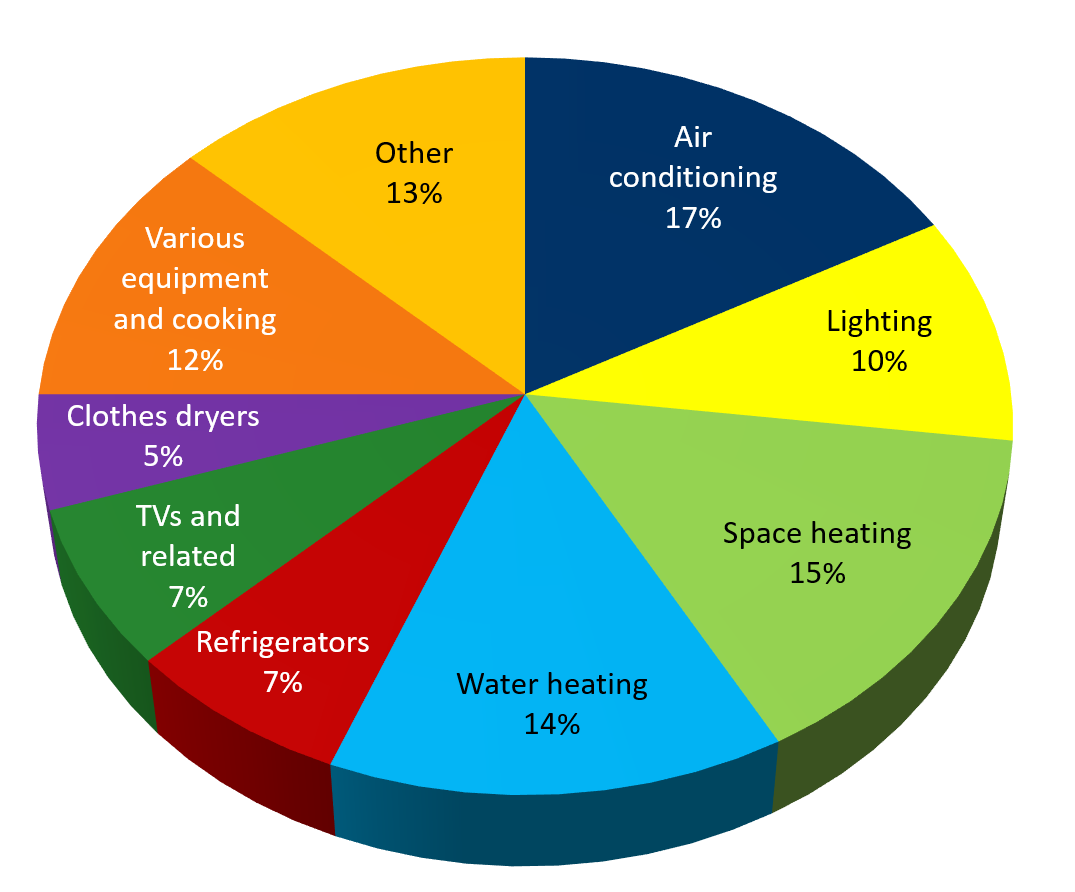 The top residential uses for electricity include space cooling, space heating, water heating, lighting, refrigeration, TVs, and clothes drying. Other devices that use significant quantities of electricity include freezers, stoves, personal computers, and furnace fans. Because of the significance of space cooling, residential usage is greatest in the summer and early fall months in most regions. During the spring and late fall, usage typically falls by as much as one-third. Winter usage is higher again due to increased space heating and lighting demands. Usage in the coldest months of December and January is frequently as much as 80 to 90% of the peak summer usage.

Residential usage also changes significantly from hour to hour during the day. Usage is minimal during the late night and early morning hours, rises as residents get out of bed, falls again as residents go to school and work, and then climbs steadily from 3 p.m. through the evening. Often, peak usage late in a day will be more than double that in the middle of the night. Unlike residential consumption of other energy forms such as natural gas, electricity usage from year to year does not swing widely. In fact, over the last 10 years, U.S. residential energy usage has never varied from year to year by more than 6%.

Residential gas customers do not generally alter usage in response to price increases in the short term since readily available alternatives do not exist once a furnace or other gas appliance has been installed in a home. The only short-term demand responses available to customers are minor such as lowering the thermostat, better insulating doors and windows or drying clothes on a clothesline. This lack of demand response is exacerbated by the fact that most gas utilities average gas prices over the year, thus failing to send clear price signals to residential customers.

Residential electric consumption patterns are sometimes driven by price in the United States. Some utilities are implementing time-of-use pricing for residential customers that exposes customers to higher prices during peak period. But most residential consumers are insulated from wholesale price swings by the nature of electric ratemaking, which often averages rates for periods of at least one year. The lack of demand response to the real-time cost of electricity has been a contributing factor to wholesale price spikes in competitive markets. In areas where residential consumers are offered price-based incentives to reduce demand when prices are high, demand response has been significantly greater.