In an AC system, frequency is the rate at which the electron flow changes direction. Frequency is measured in hertz, abbreviated as Hz, and one hertz is defined as one cycle per second. In an AC system, both the voltage and current flow continually change following a specific waveform pattern. 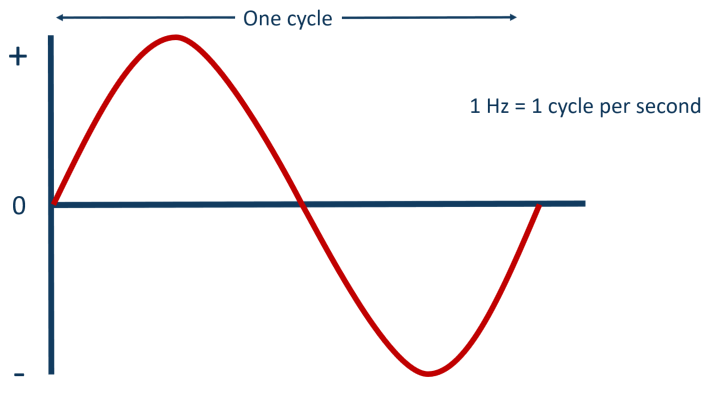 Here’s how this works from a physical standpoint. As the generator rotates it creates the electrical pressure called voltage that forces electrons to move in a specific direction in the conductor. As an electron is pushed out of the generator onto a neighboring atom on the conductor, that atom must then push an electron onto the next atom in order to maintain its structure. This causes a chain reaction through the circuit. At specific points in the revolution of the generator, the voltage changes directions and causes the electrons to move in the opposite direction and the chain reaction is reversed.

A single cycle is the AC electric waveform going from zero voltage to the maximum positive voltage value, passing back through zero to the maximum negative voltage value, and then back to zero. When the electric waveform passes through zero voltage, the direction of electron flow reverses. Using the positive and negative conventions on a graph is a simplified way to illustrate the concept of this change in electron flow. The frequency indicates how many full cycles the waveform goes through in one second, which is equivalent to saying how many times the electron flow switches to a new direction and then switches back to the original direction.

In North America, the power system operates at a frequency of 60 Hz, or 60 cycles per second. In other areas of the world, systems operate at a frequency of 50 Hz. While either operating standard provides the same level of service, many appliances will not function well or may be damaged if not operated at the frequency for which they were designed. This difference in frequency, along with differences in voltages, is why travelers must often carry power converters if they want to use their appliances in a country with a different electricity standard.

System operators have traditionally used controllable generators called automatic generation control or AGC units to fine-tune the system frequency up and down to the target level as needed in real time. As more renewable energy is added to the generation mix, operators may also use supply sources with power electronics to help control frequency. If the operator is unable to bring frequency close enough to the target level, the electrical system will begin shutting down to avoid damaging customer appliances and generating equipment.